Matt Seguin and I spend much of our leisure time mountain biking and running on the many trails around Kirkland and King County and often wonder which form of conveyance would be faster for a particular section of trail.

In general mountain biking will be faster on most trails simply because of the mechanical advantage afforded by the bicycle. We’re both fairly technically skilled riders and therefore the usual obstacles encountered in typical Pacific Northwest trails may slow us down, but don’t usually stop us from riding. However, there is a certain level of technical difficulty and grade which does slow a rider down to the point where running would be much faster.

Take two examples from Saint Edwards State Park. The Perimeter trail, #13 on the map, is unquestionably faster on a bicycle either direction. It’s low technical difficulty and there’s no way a runner could go faster than an equivalent biker. However, take the South Ridge trail, #7 on the map. This trail (while not open to bikers) is pretty clearly technical enough that there’s no way a biker is going to beat a runner, especially on the first half of the ascent out of Lake Washington.

So is it possible to find a trail that is equivalently fast on a bike as it is to a runner? Lloyd’s trail in Paradise Valley struck us as a possibility. What’s intriguing about Lloyd’s trail is that it’s basically flat—all the challenge to the cyclist is from the sharp corners, and not from a technical ascent.

Yesterday we set out to race Lloyd’s. Matt put on his biking shoes, I put on my running shoes and we warmed up the half mile to the start of the trail. 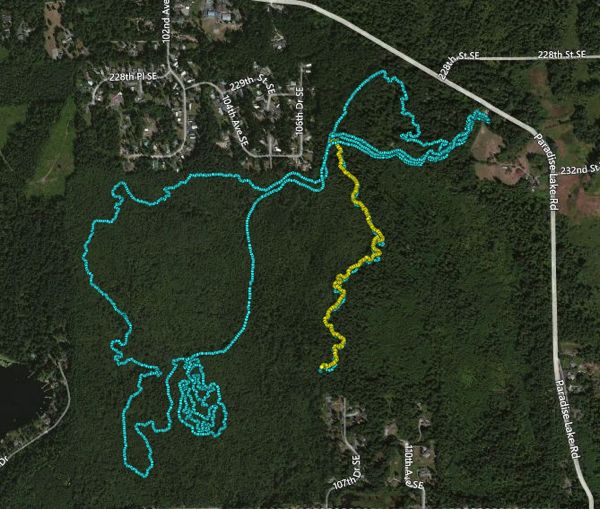 Neither of us were sure which was going to be faster, so we decided on a staggered start. Matt started up the trail on his bike, and I followed 60 seconds later. With a bit of adrenaline going, I started out a little too fast and had to throttle back on my pace and having never actually run the trail before, I struck by the technically difficulty even for a runner. The hard cornering definitely slowed me down. I never once saw Matt the entire 0.8 mile race. I finished in 6:40 according to GPS track drawn in yellow in the image above. Matt finished 6:07–33 seconds faster.

For the race back, we decided to start at the same time. This turned out to be an interesting test because the more technical section of the trail is the Southern half. I was able to quickly pass Matt on one of the corners, he passed me, I passed him, and then finally half way through he passed me for a final time. The trail was narrow enough that we both slowed each other down, and passing was done by kindly stepping aside. I was still on his back wheel at the boarded bridge over the swamp, but lost him very quickly after that and didn’t even see him until the finish. My time on the way back was 6:25, Matt finished on the bicycle in 5:50–35 seconds faster.

Of course this race is entirely dependent on our respective fitness levels and technical ability, so other’s results may vary. In our case, Matt is unquestionably more fit and a better technical cyclist than I am, although I’m not usually too far behind. Running-wise I seem to have an ever so-slight-edge on Matt, although for this distance of run it wouldn’t be much. Given this, we both think that this was a pretty fair man versus machine challenge.

One hypothesis suggested by Matt is that Lloyd’s trail is more technically limited to cyclist, while the runner is more fitness limited. So this would suggest that if our fitness levels improve over the summer, the race may be closer if we attempt to repeat it in the fall.