It’s not exactly user friendly, but once you know how it’s pretty easy to get at local employment statistics. I was looking at Link ridership reports and trying to explain why growth was exceeding all expectations, so I went on over to the Bureau of Labor Statistics and plugged in either SMU53426440000000001 or SMU53426600000000001 to get the following employment graph. 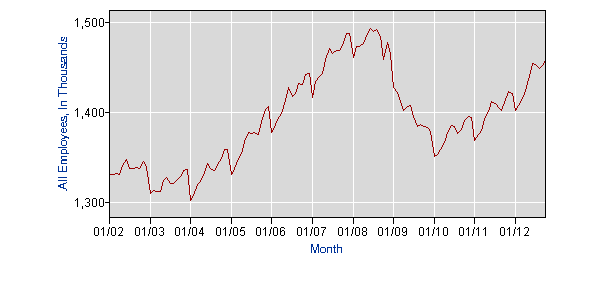 The thing to notice here is that Link opened up basically right as Seattle area employment was bottoming out from the Lesser Depression. According to the Sound Transit Blog, typical ridership growth should be at around 2-3% after a few years. However, I would argue that we’d expect things to be different coming out of a recession.

First, note that under normal ridership growth conditions, the new riders must be coming from new infrastructure created along Link. In other words, some apartment buildings go up in Columbia City, and a new office building opens downtown. This allows more people to take the train. The reality is that it won’t be that simple, but in the long run the ridership must correlate to new housing and work infrastructure. The 2-3% ridership growth says something about how often cities typically add this kind of infrastructure.

Now, however, consider what things are like at the bottom of a recession. In this case the infrastructure is already there, but sitting vacant. The number of employees that the existing buildings can handle can be estimated from the total number of employees before the recession. As employees go back to work, they’ll be heading back to these vacant buildings, to existing infrastructure. This allows a much accelerated ridership growth rate.

So, my prediction is that ridership will continue to exceed the 2-3% until employment is beyond the pre-recession levels of mid-2008.